The Fundraising Committee’s mission is to generate funds necessary to support chapter community programs, scholarships; setting chapter
up for financial success for many years to come. We fundraise so we can offer complimentary programs that enhance the community and are part of our national Five-Point Programmatic Thrust. All fundraisers are open to the public. We encourage and would appreciate everyone’s support.

Come Feel the Good Vibes as we present our next fundraiser - an evening of music and laughter with Comedy Hall of Famer, Actor, and Comedian Joe Torry, Comedian and Emmy writer Rita Brent as host, and a special appearance by Comedian E-Man.

Also, dance your shoes off to the musical sounds of The Diamond Band and DJ DMark.

Inducted into the Hall of Fame in 2006, Joe Torry joined the company of comedic legends Richard Pryor, Jerry Lee Lewis, and Bill Cosby. His off-the-cuff brand of comedy is authentic and has made him a living legend. He is a member of Omega Psi Phi Fraternity, Inc.

Host Rita Brent is a comedian, musician, and military veteran from Jackson, Mississippi. She wrote for the 73rd Primetime Emmy Awards show held on September 19, 2021 and works as a staff writer for Comedy Central's "Tha God's Honest Truth With Lenard "Charlamagne" McKelvey". She is also a proud member of Delta Sigma Theta Sorority, Inc.

You will definitely Feel the Vibe and don’t want to miss the show! See you there!

All ticket sales are final. 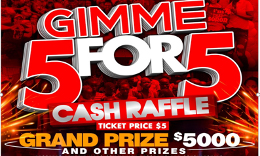 Tickets will be sold through November 7, 2021

It is that time of year for our annual fundraiser. Who needs some easy money?  MRAC gives thousands of dollars each year in scholarships from funds raised.

Donate $5 to our Gimme 5 for 5 Raffle and YOU can help us support the education of our future generation.

THE BEST OF BOTH WORLDS

Back by Popular Demand!

Join us on Sunday, November 7, 2021 at Murph's for fun, food, fellowship, and music as we watch the annual rivalry between Atlanta Falcons vs New Orleans Saints.  Wear your favorite team jerseys.  The winner of our Gimme 5 for 5 Cash Raffle will be announced during half time. This event is free and open to the public.

Register here for your free ticket.

Want to help MRAC raise funds for scholarships and community programs and still shop normally with Amazon and Kroger?

AmazonSmile is a website operated by Amazon with the same products, prices, and shopping features as Amazon.com. The difference is that when you shop on AmazonSmile, the AmazonSmile Foundation will donate 0.5% of the purchase price of eligible products to the charitable organization of your choice.

Watch the  Amazon Smiles and Kroger Community Rewards videos below to learn how to set up your accounts.